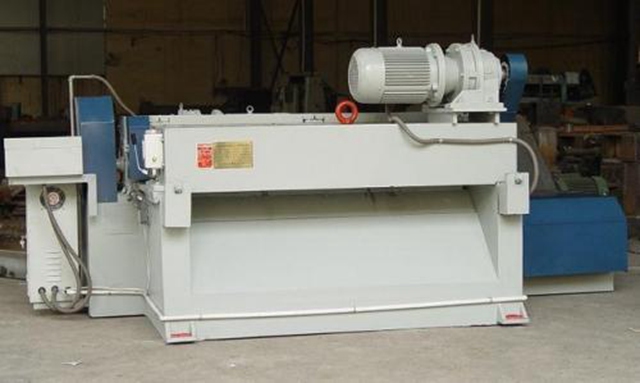 First,the storage and loading part of the CNC veneer peeler


The loading part is mainly composed of pipe support,stopper,loading mechanism,detection device,conveying device and other components.The bracket plays the role of supporting the weight of the steel pipe and storing the material;the stopper plays the role of preventing the material on the storage plate from falling continuously;the detection device is mainly completed by the sensor controlling other electrical appliances;the transmission device is mainly to complete the transmission of the steel pipe.

When loading,first retract the material stop.Because the storage plate has a certain inclination,the steel pipe begins to slowly roll down.When the sensor for detecting the material detects that there is material passing by,the stop is extended to prevent the upper The material continues to move downwards,and at the same time the feeding motor starts to rotate.The speed reduction mechanism drives the sprocket to rotate,thereby driving the transmission chain to rotate to achieve the purpose of feeding.Driven by the hydraulic cylinder,the rolling part is controlled to move up and down along the chute to realize the downward pressing or lifting of the tool.When rolling and cutting,first the cutting motor rotates and the belt wheel drives the conveyor belt to rotate,thereby driving the tool to rotate,and the hydraulic cylinder drives the cutting part to move down or up along the chute to achieve rolling.The hydraulic cylinder drives the rolling part to press the steel pipe with proper pressure to reduce the radial runout generated when the steel pipe rotates.

The feeding mechanism is realized by the transmission chain.When feeding,the transmission chain drives the steel pipe to move forward until the end of the steel pipe is blocked by the stopper,and the feeding motor stops immediately.After the feed sensor detects the arrival of the material,the rolling-cutting motor starts to start and drives the tool to rotate through the conveyor belt.Through the expansion and contraction of the hydraulic cylinder,the rolling-cutting part moves up and down along the chute,and the tool is controlled to move up and down accordingly,and the tool is gradually controlled with appropriate pressure Cut into the steel pipe,and deepen step by step with the depth of cut,until the tensile stress exceeds the tensile strength of the material,the pipe is cut,the cut steel pipe automatically falls into the trough,and the detection material sensor controls the hydraulic cylinder to drive the tool up and feed the material.The motor starts again to feed the material and realize the next cutting. 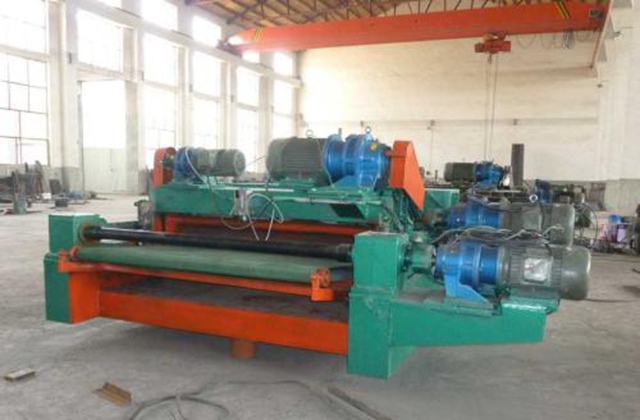 
This part is mainly composed of cutter parts,supporting rollers,stoppers and guide chutes,etc.The cutter parts include main rolling motors,conveyor belts,control hydraulic cylinders and other parts.The cutter is installed on the output shaft of the conveyor belt wheel,the main rolling motor drives the cutter to rotate through the conveyor belt device,and the motor speed can also be adjusted by the frequency converter.The feed movement of the cutter is realized by the hydraulic cylinder driving the rolling part to move up and down,and the supporting wheel plays the role of supporting the workpiece during the rolling and cutting process.The stopper is installed on the fixed position of the required material length.When the conveyor belt conveys the steel pipe in place and is blocked by the stopper,the cutting motor drives the tool to rotate through the conveyor belt,and controls the hydraulic cylinder to drive the rolling part to move down the chute.As the rolling depth deepens,the steel pipe is finally cut,and then the tool is in It moves upward under the action of the control hydraulic cylinder,and the feeding motor is then started and continues to move forward to wait for the next cutting.The roller mainly supports the material to realize the purpose of rolling and cutting.The mid-out length and the center height of the top plate at the front end of the stopper can be adjusted separately to adapt to steel pipes of different diameters and cut pieces of different lengths.

The above is the three most important parts of the CNC veneer peeling machine.